There are now tons of activity trackers that help to monitor sleep. One of such trackers is the Fitbit sleep tracker. If you’re curious to find out “how does Fitbit track your sleep?” we’ve got some information concerning that.

The Fitbit tracker comes with a feature called “Sleep Stages,” which is feature built into Fitbit trackers to help users monitor their sleep, and, ultimately, sleep better.

These trackers tell you how long you have slept and also tell you what kind of sleep you had. In essence, you can tell what is troubling your sleep from using the Sleep Stages feature of the Fitbit tracker.

It’s time to figure out, how does Fitbit track your sleep? But before we get to that, let’s be sure you even have the right device in the first place.

Which Fitbit Tracker Do You Need?

They are all worn on the wrists, and for the tracker to track your sleep, the user would have to have it on all night.

How Does Fitbit Track Your Sleep? — The Mechanism Behind Sleep Tracking in Fitbit Devices

Traditionally, there are two ways by which sleep scientists monitor sleep behavior in individuals. One method is through the use of an electroencephalogram which monitors sleep patterns by studying ongoing electrical activity in the brain.

Another method is through the use of polysomnography (also called PSG).

In the world of sleep science, these two methods are considered gold standard and are non-negotiable if you have a sleep disorder.

For Fitbit devices, on the other hand, there’s none of these hi-tech devices included in the device. The mechanism of tracking sleep is, hence, much more simplistic. Fitbit simply monitors your heart rate and muscle movement to figure out if you’re asleep or awake as well as how much you were able to sleep.

This video from Johns Hopkins Hospital explains the steps involved in a polysomnograph test as well as reasons for such tests.

How Fitbit Monitors Your Movement While Asleep

In every Fitbit sleep tracking device, there is a three-dimensional accelerometer that helps to track muscle movement. So, if the tracker is on your hand and you don’t move for about an hour, then the tracker assumes that you have fallen asleep.

In measuring sleep quality, Fitbit’s accelerometer measures the direction and length of every move you make from the time you fall asleep till you wake. It also monitors your eye movement as well.

So, if while you were asleep, you were constantly tossing and turning, or your eyes kept moving rapidly, the Fitbit tracker will consider you awake, which totally makes sense, right?

How Fitbit Monitors Your Heartrate 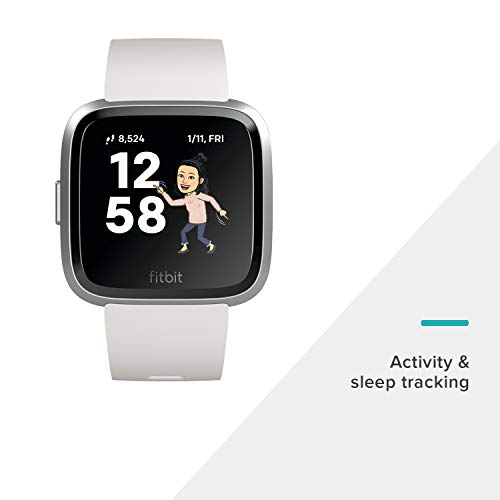 So, Fitbit has a heart tracker built into some of its activity tracking devices. What this tracker does is to monitor your Heart Rate Variability or your HRV. What’s HRV? It’s a fancy term for the little fluctuations your heartbeat experiences at different stages of your sleep.

With the heart tracker, Fitbit monitors these changes beat-to-beat and can then tell how much time you spent in each sleep stage. From that information, therefore, you can tell what quality of sleep you’re actually getting.

Sleep Stages On The Fitbit

Following the guidelines from the National Sleep Foundation, Fitbit has divided the sleep stages on its app into four. They are: Awake. Light Sleep, Deep Sleep, and REM Sleep. Here’s what each stage represents:

For a healthy adult, it’s quite rare to have 7 to 8 hours of sleep without waking up, at least, once. For most people, we would wake about 2 to 3 times at night either to pee or to get a drink of water. So, generally, waking up a number of times at night isn’t always a signal that you have a sleep disorder.

In fact, some people have what is called a low arousal threshold. So, they tend to wake up a couple of times at night. However, these periods are so brief, the individual is unlikely to remember it when they are fully awake.

Instances of the scenario described above are when someone adjusts their blanket, responds to bright light or touch, or makes a soft noise in their sleep.

At this stage, your body has just started to relax and you’re beginning to fall alseep. You’re still somewhat aware of your surroundings in this phase but not very. You can still be easily awakened in this phase and might switch from sleep to awakeness in this stage as well.

Furthermore, as your body slows down, so does your heart rate — it decreases ever so slightly.

This kind of sleep is considered refreshing and even vital for the body and the mind.

At this stage, your arousal threshold gets stronger as your muscles relax, your heart rate slows significantly, and you become less aware and responsive to external stimuli such as sound, light, and touch.

The longer you are in deep sleep, usually, the better you feel throughout the day. This is because deep sleep is the stage where your heart rate regularizes and your body begins to recover from the physical activities of the day.

Deep sleep is super important for your immune system and also supports learning and memory formation.

Sadly, as you get older, the quality of your deep sleep gradually worsens although sleep patterns still vary from person to person.

From the deep sleep stage, your sleep gets even deeper and enters into the REM stage. At this point, all the muscles below your neck and downwards become paralyzed. The temporary paralysis of the muscles in the lower part of your body is, partly, to prevent you from acting out your dreams. However, your brain remains highly active.

This is the stage where dreaming occurs, and at this point, there’s rapid eye movement as well as an increase in your heart rate. For some people, REM sleep can last up to 90 minutes.

REM sleep is important for cognitive function as well as mood regulation. In this stage of your sleep, your brain processes the activities of the day and then consolidates your memories such that they become stored in your long-term memory.

Check out this 2-minute video for further explanation of sleep stages.

How Does Fitbit Track Your Sleep Duration? 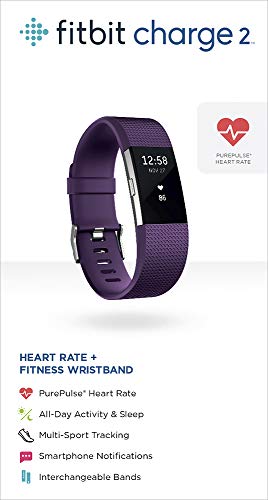 So, if you the device tracked a total of 7 hours of sleep and an hour of awakeness or restless, your sleep duration would be 6 hours on the log.

Using The Sleep Data On Your Fitbit Tracker

Let’s talk about getting started with your sleep tracking in the first place. So, you’d need to know what kind of Fitbit you’re using, whether it’s an older version or a newer one.

If you’re using an older model like the Fitbit One, Fitbit Ultra, or the Fitbit Flex, you’d have to press and hold on to a button. When you see “Start”, you know you’ve activated the sleep mode.

To stop the device from recording, you’d have to repeat the process when you wake up. These models only use an accelerometer to track your sleeping.

For newer models such as the Fitbit Inspire HR, Fitbit Charge 2, Fitbit Inspire HR, as well as the Fitbit Force, these make use of an accelerometer and a heart monitor. Hence, they monitor both movement and heart rate when tracking sleep. For these models, you don’t need to press and hold on to any button as they automatically begin and stop tracking based on the aforementioned parameters.

Please note that, for these devices, you’d have to have slept for, at least, 3 hours, have your device sufficiently charged, and ensure that the tracker has a snug fit on your wrist for sleep data to be generated. As a tip, we recommend that you wear your device a little higher up your wrist for the best results.

Here’s how to use the sleep tools on your Fitbit. Check out this video below:

How To Check Your Sleep Data On Your Fitbit Tracker

Now, to check your sleep readings for the night. When you wake up, open the Fitbit app on your smartphone and allow it to sync with your tracker. On the “Today” page, you should be able to see all the stats for your sleep the previous night.

The number displayed is the total number of hours (or minutes, hopefully not though) that Fitbit reckons you to have been asleep during the time. It does not factor the amount of time spent restless or awake into this figure.

For a more detailed account, tap the sleep entry which will lead you to the Sleep page. At the top, there’s a graph which shows you how you’ve slept in the previous week. When you swipe the graph, you should see three tabs. One for your sleep duration each night, another for your sleep schedule, and another for the summary of your sleep stages.

Below this graph, you’ll find a list of each of your daily sleep cycles. This list gives a much more detailed account of your sleep stages during the night.

If you want to get more details, you simply tap on the day you wish to view. You can check how well you did by comparing your sleep data with what the reading of an average person of your sex and age should be.

What To Do With The Sleep Information From Your Fitbit Tracker

Sleep information from a Fitbit tracker gives a fairly accurate assessment of how well you’re sleeping. It can help you monitor your sleeping trends to see if you’re constantly restless or waking up at night.

It may also play a somewhat important role in picking up certain changes in your sleep pattern. So, if, usually, you sleep well but suddenly you notice a slight change in your data, you’d know on time if you need to make some lifestyle changes or speak to your physician.

How To Improve Your Sleep Readings On The Fitbit Tracker

If you don’t like the readings from your sleep tracker suggesting that you’re not sleeping well enough, the truth is that there are no hard and fast rules to solving that. However, here are some thoughts that might help.

The first is obvious, if you think you have a sleep disorder, then see your doctor. Whatever your Fitbit tracker is telling you, good or bad, if you think a disorder is a possibility, your physician is the best person to consult.

If, on the other hand, you’re a relatively healthy sleeper, then these two ideas might help to improve your readings to something you might prefer.

i. Limit Your Intake Of Alcohol

For some, taking alcohol before bed helps them sleep especially if they are worried. However, it could also make you wake more often at night, leading to poor sleep.

ii. Have A Sleep Routine And Stick To It

If you’re having a challenge developing and sticking to a sleep routine, then your Fitbit tracker can help. Set the device such that it reminds you of your bedtime at night and wake time in the morning.

That said, sometimes, the reason your Fitbit tracker might be displaying such numbers might be an issue of its accuracy. A number of people have had reasons to doubt the accuracy of Fitbit sleep trackers at one point or another. We’ve discussed that on this blog before, if you want, you can click here to read the article: How Accurate is the Fitbit Sleep Tracker?

In that article, we give some reasons for some of the readings people get from their trackers. We also enumerate some handy solutions for sleep tracker inaccuracy where it can be solved.